This site does not support Internet Explorer. Please use a modern browser such as: Chrome, Firefox, Safari (included with Mac OS) or Edge (included with Windows).

Fungicides during bloom – the pollination paradox

Download Fungicides during bloom- the pollination paradox as a PDF

Fungicides are useful tools for growers to protect against many serious plant pathogens.  The use of fungicides, however, can have serious health effects for honey bees and other pollinators.  These health effects can lead to weaker colonies, or even colony loss.  Weaker and lost colonies mean an increase in rental fees, as well as less efficient pollination services, increasing costs, and reducing benefits.  This document reviews the known effects that fungicide products can have on honey bee health, and provides some guidelines to reduce honey bee fungicide exposure, and protect your investment in pollination services. 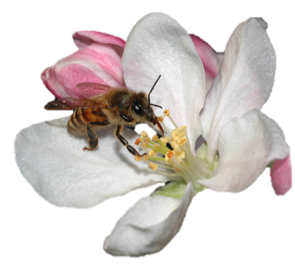 Honey bees can come into contact with fungicides through direct spray, contact with treated crops, drift onto nearby floral resources, and water contamination through runoff. Foraging bees will carry resources and pesticides back to the hive, which means that bees who are not coming into immediate contact with pesticides can still be exposed through stored hive products. Stored pesticides can remain in bee hives for a long period, resulting in chronic exposure. Fungicides are commonly found in honey bee hives – fungicide residues found in both hive pollen stores and in wax comb are significantly higher than residues of herbicides or insecticides. Fungicides are a significant contaminant of bee bread, the main food source for developing bees, and have also been detected in honey.

The danger of chemical mixtures

Honey bees are exposed to many agrochemicals at once. When mixed with other chemicals, fungicides can increase in toxicity, and they can increase the toxicity of other chemicals - a phenomenon called “synergism.” Fungicides can cause synergistic effects with many commonly used chemicals. Synergistic effects include increased risk of disease, an inability to detoxify other chemicals, a reduction in energy within flight muscles, an increase in hypothermia, and an inability to digest important compounds in their diet. Some pyrethroid insecticides repel pollinating bees, so they are considered “safe for pollinators.”  Fungicides can reduce this repellency effect and therefore increase the insecticide’s toxicity. Many fungicide products that are deemed “safe for bees” can become very hazardous when they are combined with other chemicals.

Pesticide regulations and labels do not reflect true risks to bees. Label restrictions focus only on death after acute exposure and are not found on chemicals like fungicides that cause sub-lethal effects - they do not immediately cause death but still severely disrupt the bee’s health and ability to function properly. Each bee fills a distinct role within the colony, and fungicides can disrupt a bee’s ability to perform their role, causing a ripple effect within the colony, and eventually leading to colony collapse.

Just because fungicides are not labeled as “toxic to pollinators” does not mean the product is safe for bees!

Other risks are highly understudied, including effects in developing bees, and the increased toxicity caused by combined exposures. Recent studies have begun to examine fungicide ingredients that are supposedly “inert”, such as spray adjuvants; these compounds can lead to a decrease in immune function, and learning and memory impairment in bees. It is vital that these knowledge gaps be addressed and that new risk management strategies are developed to protect bees.

Tips for protecting bees from fungicides 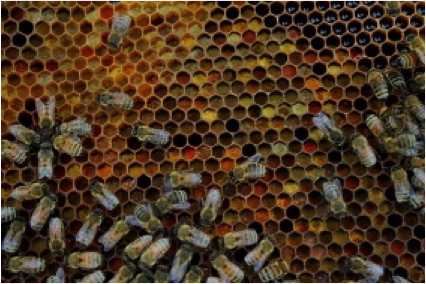 The link between fungicides and nutrition. Pollen is the sole source of protein for a honey bee colony, and is essential for the growth of the developing bees.  Pollen is modified into a substance known as bee bread, which is stored as a long-term food source for larvae when fresh pollen is not available.  Fungicides are thought to affect the formation of bee bread, risking the long-term nutrition and feed availability for the colony.